By Jude Obichukwu September 26, 2022 No Comments

Pere in his prediction announced Phyna as the winner of BBNaija Season 7 Reality show, he also announced Bryan as her second runner up.

He made this predictions after the last eviction sees Groovy, Hermes and Sheggz out of the Big Brother Game last Sunday. 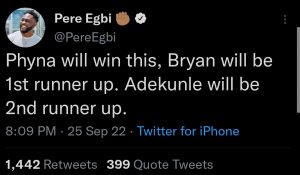 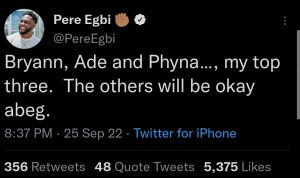 ‘’Phyna will win this, Bryan will be 1st runner up. Adekunle will be 2nd runner up. Bryann, Ade and Phyna my top three, the others will be okay abeg’’.

Let wait for 2nd  for the final let see if Pere predictions about Phyna as the winner and Bryan and Adekunle will be correct.

Always stay tune with us for more news trends and celebrity gist, Subscribe to our YouTube Channel @Itootalk Tv.

I don’t care about your colour – BBNaija Tacha fumes after facing rac!sm in Dubai.